Three Branches of the U.S. Government

The Constitution of the United States divides the federal government into three branches to make sure no individual or group will have too much power:

Legislative—Makes laws (Congress, comprised of the House of Representatives and Senate)

Each branch of government can change acts of the other branches:

This ability of each branch to respond to the actions of the other branches is called the system of checks and balances. 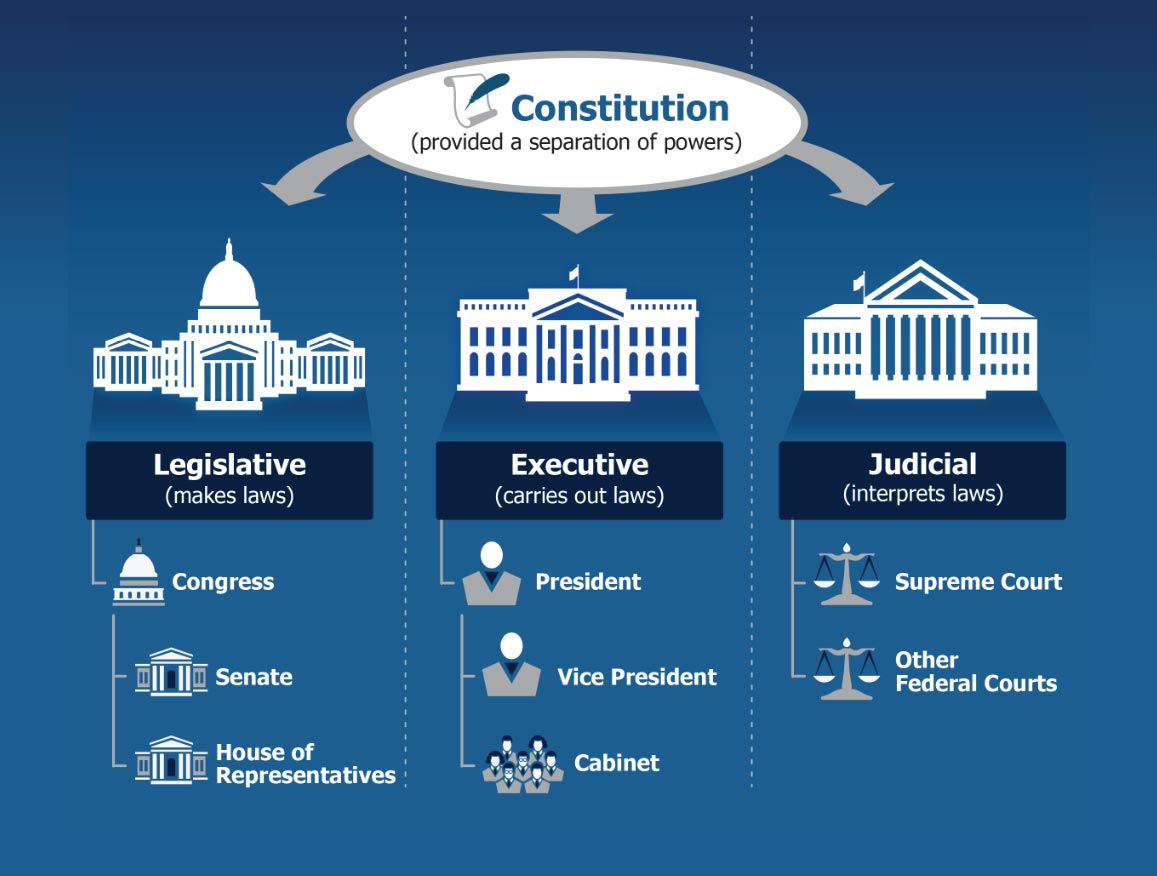 Legislative Branch of the U.S. Government

The legislative branch drafts proposed laws, confirms or rejects presidential nominations for heads of federal agencies, federal judges, and the Supreme Court, and has the authority to declare war. This branch includes Congress (the Senate and House of Representatives) and special agencies and offices that provide support services to Congress. American citizens have the right to vote for Senators and Representatives through free, confidential ballots.

Congress is composed of two parts:

Senate—There are two elected Senators per state, totaling 100 Senators. A Senate term is six years and there is no limit to the number of terms an individual can serve.

House of Representatives—There are 435 elected Representatives, which are divided among the 50 states in proportion to their total population. There are additional non-voting delegates who represent the District of Columbia and the territories. A Representative serves a two-year term, and there is no limit to the number of terms an individual can serve.

Executive Branch of the U.S. Government 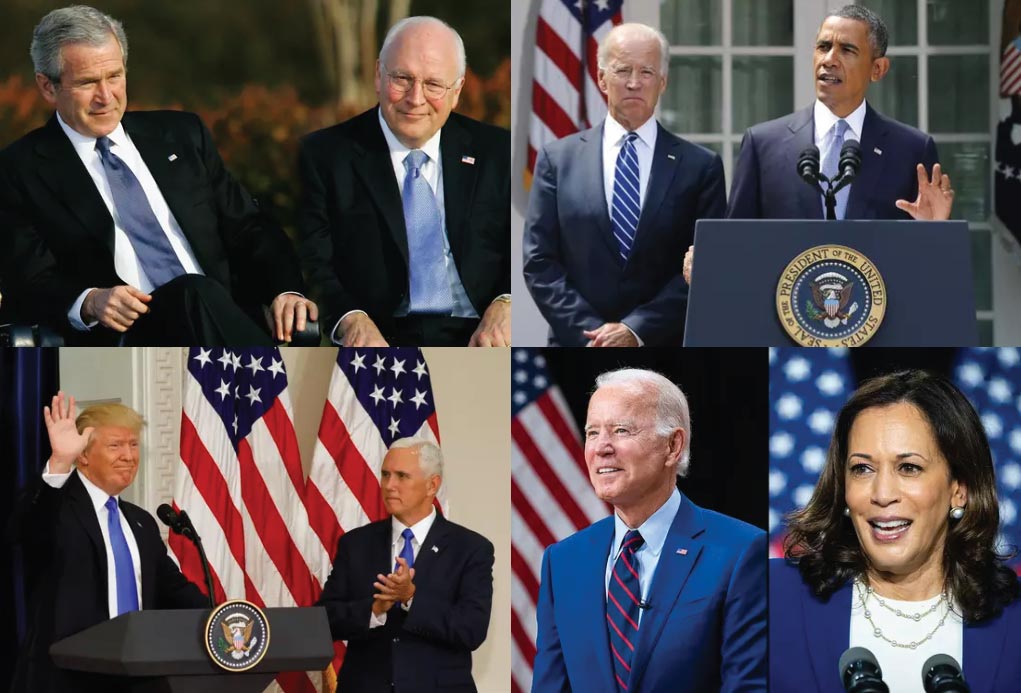 The executive branch carries out and enforces laws. It includes the President, Vice President, the Cabinet, executive departments, independent agencies, and other boards, commissions, and committees.

American citizens have the right to vote for the President and Vice President through free, confidential ballots.

Key roles of the executive branch include:

President—The president leads the country. He or she is the head of state, leader of the federal government, and Commander in Chief of the United States armed forces. The president serves a four-year term and can be elected no more than two times.

The Cabinet—Cabinet members serve as advisors to the president. They include the vice president, heads of executive departments, and other high-ranking government officials. Cabinet members are nominated by the president and must be approved by a simple majority of the Senate—51 votes if all 100 Senators vote.

Executive Branch Agencies, Commissions, and Committees—Much of the work in the executive branch is done by federal agencies, departments, committees, and other groups.

Judicial Branch of the U.S. Government 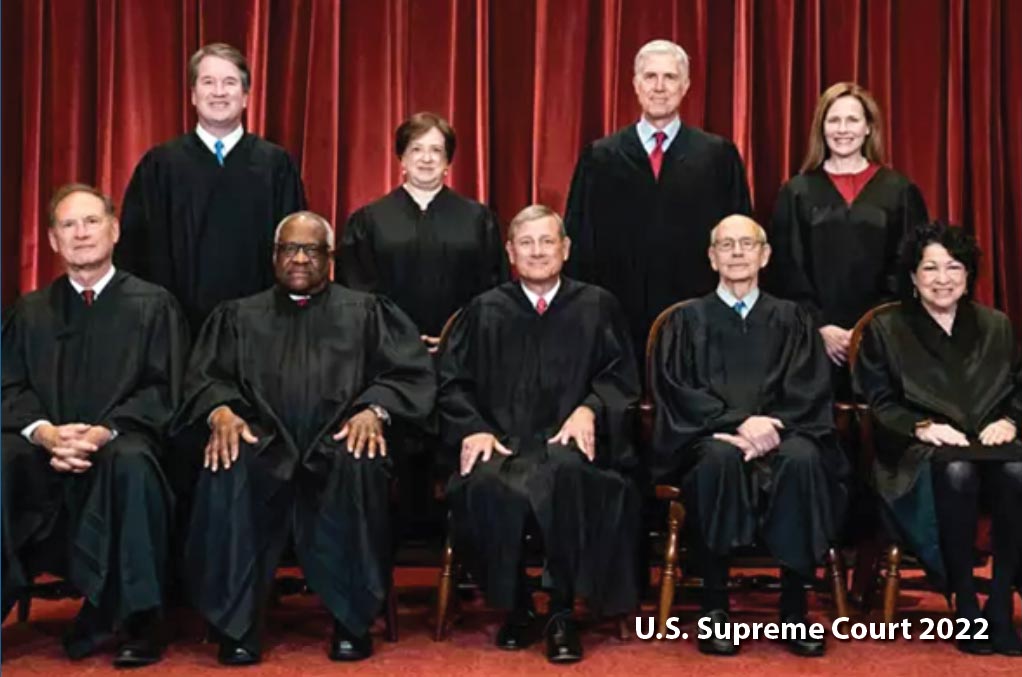 The judicial branch interprets the meaning of laws, applies laws to individual cases, and decides if laws violate the Constitution. It is comprised of the Supreme Court and other federal courts.

Nine members make up the Supreme Court—a Chief Justice and eight Associate Justices. There must be a minimum or quorum of six Justices to decide a case.

If there is an even number of Justices and a case results in a tie, the lower court’s decision stands.

There is no fixed term for Justices. They serve until their death, retirement, or removal in exceptional circumstances.

The Constitution gives Congress the authority to establish other federal courts to handle cases that involve federal laws including tax and bankruptcy, lawsuits involving U.S. and state governments or the Constitution, and more. Other federal judicial agencies and programs support the courts and research judicial policy.

The American Flag and Its Flying Rules 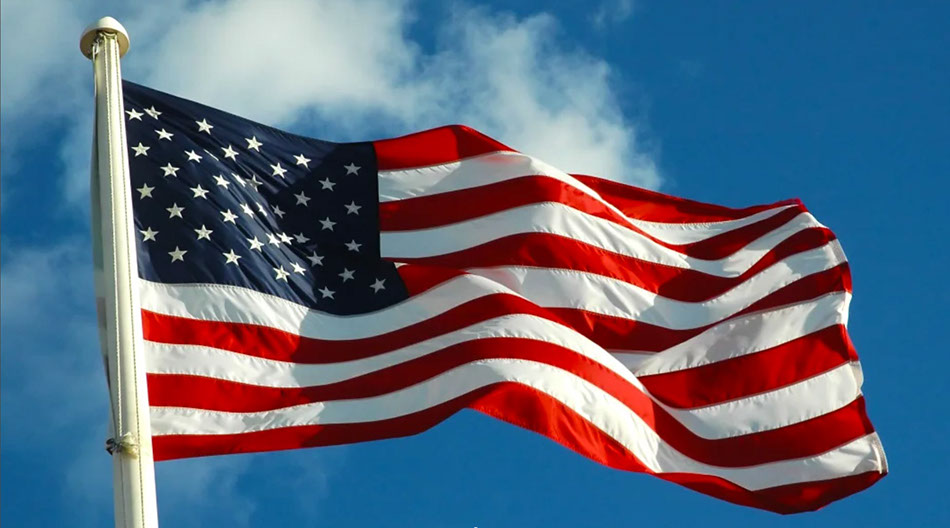 The Flag of the United States of America is a symbol of freedom and liberty to which Americans pledge their allegiance. Standing at attention and facing the flag with their right hand over the heart, they recite:

“I pledge allegiance to the flag of the United States of America, and to the republic for which it stands, one nation under God, indivisible, with liberty and justice for all.”

The flag’s 13 alternating red and white stripes represent the 13 original colonies. Its 50 white stars on a blue field represent the 50 states.

The colors on the flag represent:

If you need additional information or have a question, you can email the Department of State’s protocol office at protocolhelp@state.gov.

To order a U.S. flag that has flown over the Capitol, contact your senator’s office.

According to U.S. Flag Code, a worn out American flag should be destroyed in a dignified way, preferably by burning.

Flying the American Flag at Half-Staff

The United States flag flies at half-staff (or half-mast) when the nation or a state is in mourning. The president, through a presidential proclamation, a state governor, or the mayor of the District of Columbia can order flags to fly at half-staff. Most often, this is done to mark the death of a government official, military member, or first responder; in honor of Memorial Day or other national day of remembrance; or following a national tragedy.

Information in this document was gathered from: https://www.usa.gov/

Not On Our Watch